This week we’ve got a roundup of stats focused on the global impact of the coronavirus pandemic.

We’ll be covering a range of topics including delays in marketing activities, ad spend, the travel industry, ecommerce habits and gaming and much more.

There’s even more over on the Internet Statistics Database.

Data from expert analyst Michael Olson of Piper Sandler, as reported by NASDAQ, predicts that Netflix’s year-on-year subscriptions growth for the US and Canadian markets is now expected to reach more than double previous predictions of 1.6%.

Indeed, Olson expects this figure to reach closer to 3.8% as the public are encouraged to stay mostly indoors during the outbreak and therefore resort to popular streaming platforms. The research also suggests that the growth of international subscriptions will rise to 30.9% year-on-year compared to previous estimations of 29.9%.

Streaming services are potentially one of the very few sectors that are set to withstand or even benefit from the coronavirus as it continues to spread. It will be fascinating to see what impact staying at home will have on major providers like Netflix, Prime Video, Now TV and Hulu once enough data has been collected.

With Disney Plus’ much anticipated arrival on UK shores next week, the playing field becomes even more interesting. The coincidentally excellent timing of its launch may do Disney some favours, in spite of the fact that all of the brand’s UK press events have been cancelled. 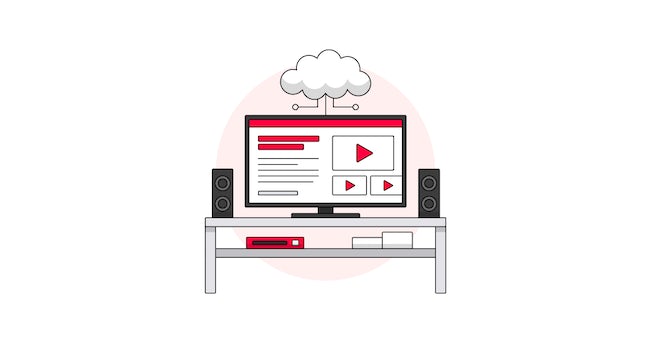 Expert analyst Rob Sanderson from Loop Capital Markets predicts that Google and Facebook’s ad revenue will be severely impacted by the decrease in ad spend by travel brands (as reported by Search Engine Land).

According to his research, Google could see a 15% drop in year-on-year ad revenue during Q1 from lower spending in the travel sector as customers hold off from booking holidays until the outbreak has passed. This drop could increase to 20% by the end of Q2 depending on the duration and scale of the outbreak in key markets around the world.

Google and Facebook are likely to take an additional hit from other industries who have been affected by changes in consumer behaviour since the Coronavirus spread globally. Analysts Laura Martin and Dan Medina from the Needham Research Institute claim there is already evidence that ad spend has decreased in sectors such as entertainment, retail and FMCG as cinemas and restaurants close, consumers avoid malls and people alter their spending habits.

Combining this with reduced spend in the travel industry, it could represent between 30-45% of Facebook’s overall ad revenue.

Furthermore, continued uncertainty could cause marketers in other areas to reconsider their ad spend and may consolidate with the hardest hit industries to produce an even bleaker picture for the revenues of Facebook and Google over the coming quarters.

Coronavirus: How travel and hospitality brands should respond

Respondents from affected regions have revealed their lifestyle changes, opinions and reactions brought about by the pandemic in a new study from Ipsos MORI.

While footfall in physical retail stores is understandably decreasing due to social distancing measures, this is an interesting time for ecommerce. According to Ipsos MORI, 50% of Chinese and 31% of Italian consumers say they’re shopping online ‘more frequently’ to purchase products they’d usually buy in-store. Other countries such as Vietnam, India and Russia have also seen their populations turning to ecommerce more often to shop – with increase of use measured at 57%, 55% and 27% respectively.

Only 18% of UK respondents said that they were using online stores more frequently, with close to half reporting there was ‘no change’ in their ecommerce habits.

It’s been common knowledge that, in some regions, many consumers have been stockpiling, whether via online shopping channels or brick-and-mortar supermarkets. In fact, those from the UK are the most likely to blame stockpiling for shortages of food and other essential items (89%) than any other country. France (87%) and Australia (86%), which have also experienced problems with panic buying, came close second and third. Meanwhile China (46%) and India (40%) commonly cite supply-chain issues as the reason for shortages, despite more respondents from Asian areas actively stockpiling than those from Europe and the US. 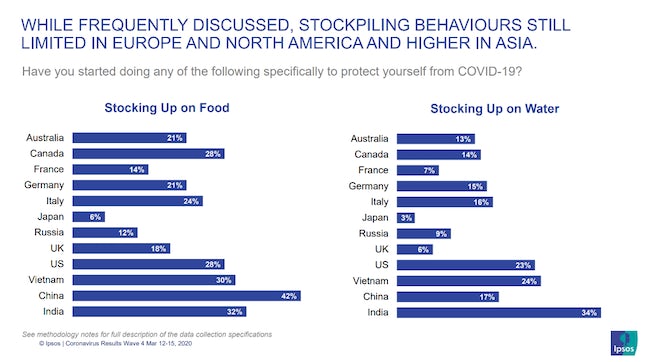 This data on ecommerce habits in virus ‘hot spots’ may help to predict what is to come for those countries still grappling with the earlier stages of the pandemic, such as France, Germany, the UK and the US.

How is coronavirus impacting the retail industry?

Grocery apps in the US have experienced record numbers of daily downloads in March, according to app analytics company Apptopia.

As the virus begins to take its toll in the US, it appears that more and more consumers are turning to online grocery delivery, rather than risking a trip out themselves. Sunday 15th March saw a record number of average downloads, with Instacart experiencing a 218% increase when compared to download activity in February. Earlier this month, the brand claimed that overall sales growth had improved tenfold during the first week of March compared to the previous week – results which no doubt have been aided by increased interest in its app.

Walmart, which has a standalone grocery app called ‘Walmart Grocery’, saw a 160% growth in app downloads over the same period, despite an announcement from the brand that it will be phased out and consolidated into a single flagship app by the summer months. 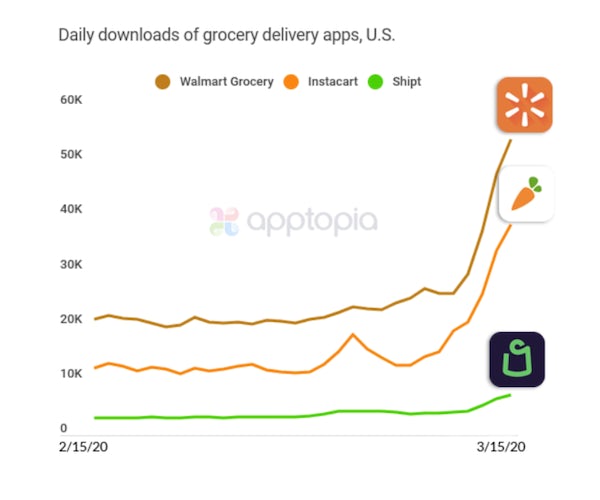 Meanwhile US retail giant Target experienced similar month-on-month growth in its mobile app downloads Shipt (124%) and Target (98%) as shoppers order essentials to their homes. It is thought that the introduction of contact-free delivery options by big brands has had a partial role to play when it comes to recent app demand.

This trend appears to show no signs of slowing and it would be unsurprising to see new download and usage records being set in the future as the situation worsens in the region. 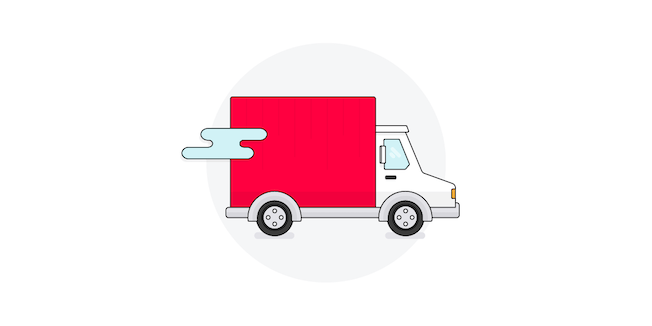 According to data from SteamDB, Steam (the global PC gaming platform) attracted a cool 20.3 million concurring users on Sunday 15th March – setting a record for the number of users online at any one time in its 16-year history.

#Steam has just reached a new concurrent online user record of 20 million, with 6.2 million currently in-game, likely due to many people staying at home due to the #coronavirus.https://t.co/bzLMfMOJvD#COVID19

Despite this record being broken on a weekend, when gamers have more time to play, it is likely that the worldwide Coronavirus pandemic has had an impact on the steady increase in online activity as many more find themselves at home than usual. 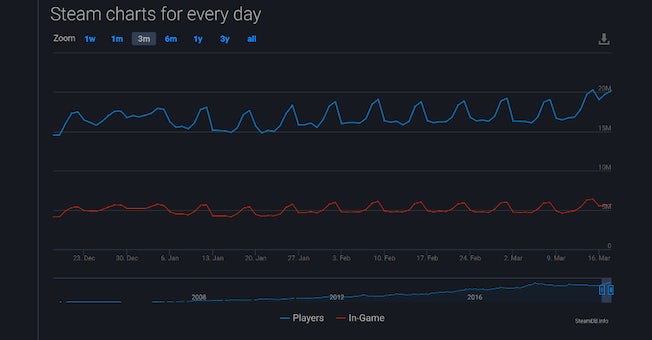 It seems that some of the global population have turned to online gaming as an attempt to relieve boredom (and to socialise) while stuck inside. This could be good news for the gaming industry in a time when other market sectors are struggling as the general public make significant changes to their lifestyles in order to help slow its spread.

However, in light of the vast cancellation of events, including eSports tournaments, and the uncertainty facing hardware-reliant games companies like Nintendo, it remains to be seen what the true impact of the virus will be on this industry going forward. 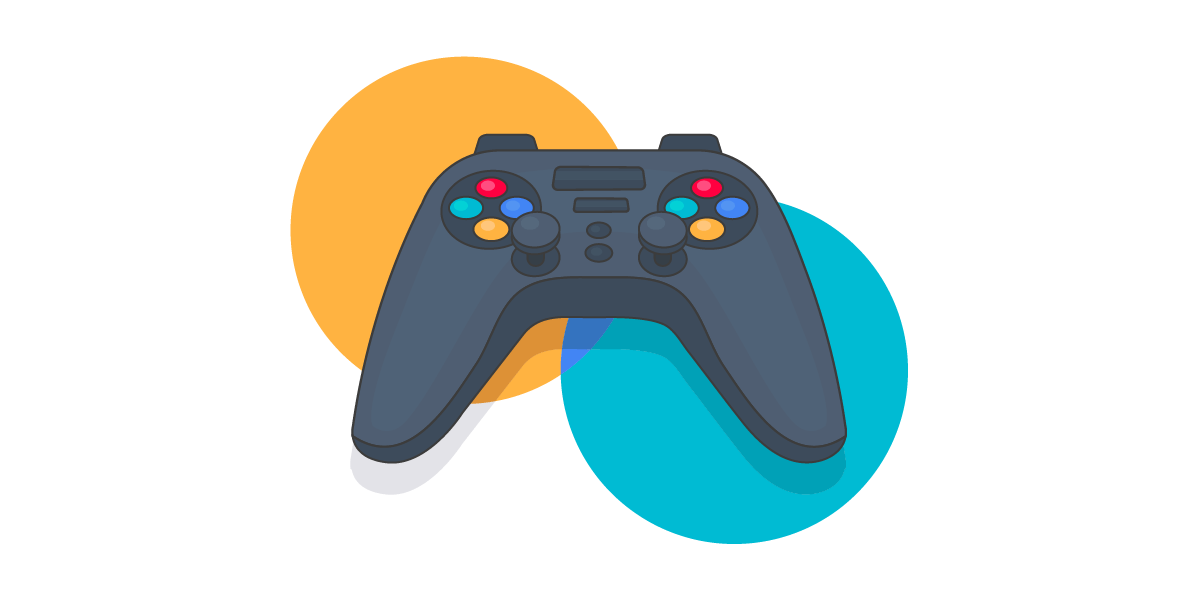 Coronavirus: amidst conference postponements, some events are going virtual – but will they work?

Industry experts have re-evaluated the Chinese ad spend growth forecast as the impact of the coronavirus comes to light, according to Dentsu Aegis Network. It is now predicted to reach 3.9% year-on-year, falling from a much larger previous estimate of 6.9%.

While the coronavirus is very much to blame for this, there are also other factors at play such as slower retail sales and a decline in economic output which has been an ongoing trend in the region for a number of years. However, the newly predicted 3.9% growth remains higher than that of 2019, (despite the pandemic) and this is mostly driven by a spike in mobile ad spend which is expected to rise by 17.6%.

Meanwhile, ad spend in areas of mainland Europe such as Spain, Italy and Germany are expected to see an overall decrease in ad spend growth this year and in 2021. Italy is predicted to be worst hit, after a national ban on gambling advertising came into effect last year, followed this year by the coronavirus outbreak.

Coronavirus: major brands are delaying investment in digital transformation when they need to bring it forward

Results from Econsultancy and Marketing Week’s COVID19 Business Impact Survey reveal that organisations project major changes in behaviour of their business customers in light of the Coronavirus pandemic.

Seventy-eight percent of marketers from large UK organisations expect that their business customers will delay their spending decisions, while 55% expect delays in product/service launches from business clients. Perhaps unsurprisingly, a huge 91% said that their business customers are reluctant to schedule in-person meetings, which has the potential to affect relationships and collaboration if companies are not proactive enough to find alternatives. 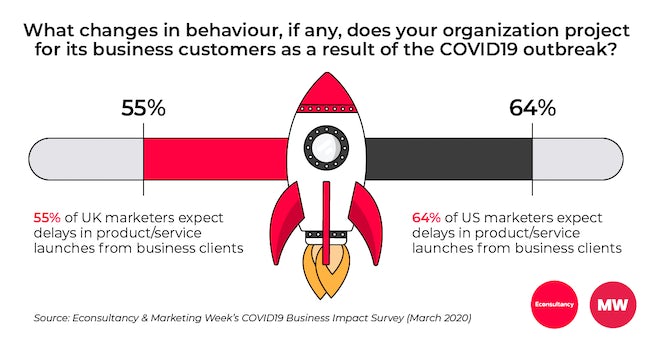 Meanwhile, despite being further behind in the pandemic timeline than other regions, UK marketers are already feeling the impact of the coronavirus outbreak on their marketing activities. Sixty-two percent of UK respondents said that marketing budget commitments are delayed or under review, and a further 42% said that planned technology/infrastructure spending is also being treated in the same way. Even more worryingly, 45% said that any new hires have either been postponed or re-evaluated, effectively pausing the procurement of much needed new talent in a time where businesses need to be agile and forward-thinking.

These statistics may ultimately result in significant lack of growth as top-level decision-making changes, spending slows and marketing activities are delayed amidst this new and ongoing uncertainty.

Despite an unprecedented number of people cancelling pre-booked holidays and choosing not to travel, it doesn’t mean they haven’t stopped looking at holidays altogether, according to a report from Izea.

In fact, 55% of US consumers who usually travel five or more times per year say they ‘may’ or will ‘likely’ purchase a future holiday while confined to their homes during the Coronavirus outbreak. This likelihood rises to 61% for those who travel frequently for business purposes.

The data also reveals how future booking intentions differ depending on how far in the future they are. Thirty-eight percent of US consumers say that they ‘would never buy’ a non-refundable hotel or plane reservation if the required travel date fell within the next 1-4 weeks. The number declines steadily as the number of weeks pass. Once the travel date falls over nine months from now (around Christmastime), just over one-fifth still refuse to make non-refundable bookings but more require increasingly higher discounts of up to 50% in order to be persuaded.

This suggests that consumers will take a while to come back around to the idea of travelling abroad on a non-refundable basis once the coronavirus has died down; certainly longer than a timeframe of 9 months. As a result, holiday companies must look to the future and focus on targeting loyal, frequent customers (whether travelling for business or pleasure) who will more likely take the risk sooner than more casual vacationers. 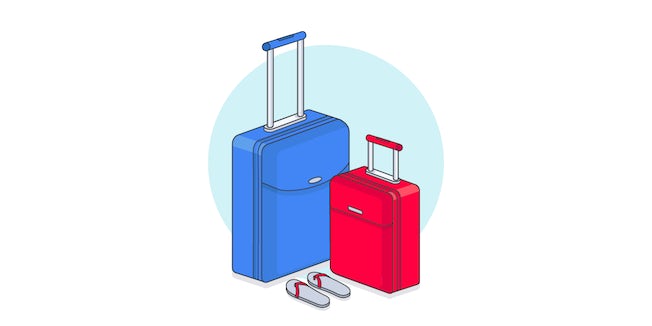 A day in the life of… Tom Laranjo, Managing Director at Total Media – Econsultancy