There’s a bumper round-up of stats for you this week.

We’ll be covering everything from personalisation to politics.

As always, be sure to take a look at Econsultancy’s Internet Statistics Database for more interesting data.

A recent report from Accenture states that 66% of consumers are equally as concerned about personal data being used for commercial personalisation services as they are about it being compromised through hacking attempts. Meanwhile, 70% agree that they are worried about data privacy and tracking when it comes to their activities and interactions online.

These results prove the importance of transparency between consumers and brands, particularly when it comes to online touchpoints in the customer journey. It’s no secret that, despite customers vying for more customised online experiences, they are becoming increasingly sceptical about how those experiences are implemented. One statistic from RSA Security, cited in the report, showed that only 17% of global consumers believed that personalised advertisements were ethical.

There appears to be a correlation between age and perception of trustworthiness, albeit a slight one. Baby Boomers and prior generations seem to be the most concerned about both data privacy/tracking (77%) and commercial data use (72%) and this generally declines throughout following generations. A smaller 60% of both Gen Z and Millennials are concerned about the commercial use of data, while Gen Z are marginally more concerned than their Millennial peers about data privacy and tracking (67% vs. 65%).

It is clear, then, that internet users believe personalisation is out of their control, and they wish to regain that control in order to fully trust online brands. Data privacy laws such as GDPR and CCPA are one such step towards a more transparent relationship between companies and their consumers. However, there is clearly a lot more that needs to be done to demonstrate exactly how personal data is being used for relevant, customised experiences. 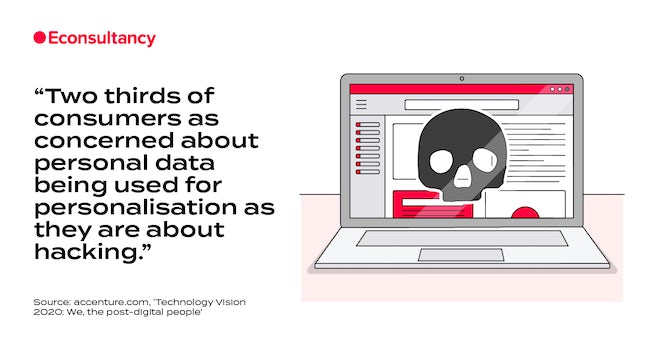 12 stats that show the importance of personalisation

Forty two percent of US-based B2B companies claim that they are ‘early’ in their brand purpose journey, according to new research from consultancy Carol Cone On Purpose. The report surveyed 250 B2B companies spanning various sectors including financial services, healthcare, manufacturing and telecommunications, among others, about their brand purpose.

Organisations that took part seem to be keen on focusing on brand purpose, but have some difficulty defining it. A huge 93% of respondents said that they are still on the brand purpose journey and have not yet completed it.

However, it also appears that attitudes are changing towards its importance within overall marketing strategies. Fifty-seven percent claim that their companies are ‘somewhat’ or ‘much more’ focused on brand purpose today than they were 3 years ago. The majority (82%) believe organisations with strong brand purpose experience ‘greater success than those without’, while others say it would ‘support recruiting’ (75%) and that it would help ‘motivate sales teams’ (73%).

Despite these claims, there are also some concerns that prevent purpose engagement being fully implemented by some B2B businesses. Fifty-six percent said that brand purpose feels ‘more like a PR exercise than an authentic commitment’. Issues surrounding measuring effectiveness and lack of resources were cited as other examples. It is important that companies embrace brand purpose authentically in order to truly get the most rewards from it, otherwise it may indeed become simply an expensive PR exercise.
B2B Content Marketing Best Practice Guide

Figures from the Office of National Statistics show a continued decline in total retail sales in the three months leading to January 2020. Value (or amount spent) fell by 0.5% and volume (quantity bought) fell by 0.8% during this period.

All sectors experienced a decline in growth throughout these three months, although some were impacted more than others. Quantity bought in textile, clothing and footwear stores declined by -1.5% 3 month on 3 month, whereas household goods stores and food stores saw smaller declines of -0.5% and -0.7% respectively.

Online sales accounted for 19% of all retailing as of January, which was slightly down from 19.3% in December. This may be due to heightened festive spending towards the latter half of the year trailing off throughout the beginning of 2020.

However, there was some positive news amongst the data. Retail volumes increased in January by 0.9% following on from a decline in both November and December. Positive, albeit modest, growth of 1.7% in food stores and 1.3% in non-food stores is thought to have contributed to this slight upturn in volume. 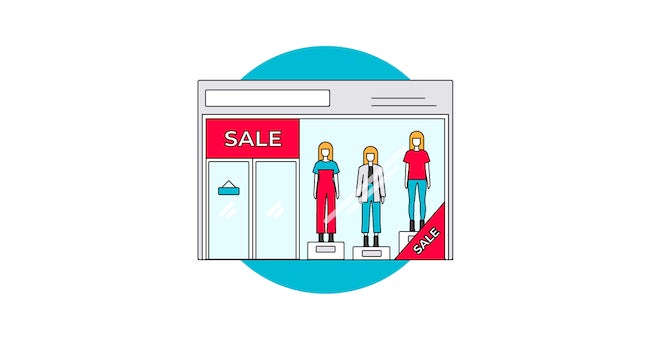 41% of the UK workforce use WhatsApp for professional purposes

New insight from Guild suggests that as many as 41% of the UK workforce use WhatsApp for professional purposes.

The study, which surveyed over 1200 employees from around the country, claims that this figure is even higher for those aged under 45 years old (53%). They’re even more likely to use the platform for work purposes if they live in the Greater London area (58%).

Despite of WhatsApp’s terms of use policy, which states clearly that it must only be used for personal correspondence, employees appear to be using the messaging service often without prior approval from their company’s IT and/or compliance departments.

This practice – known as ‘Shadow Communication’ – could be worrying for businesses, particularly if the trend continues to escalate, as they have no control over what is being shared. Concerns that WhatsApp is not entirely GDPR compliant add further risk that confidential or sensitive business information being sent back and forth among employees may not be securely protected. 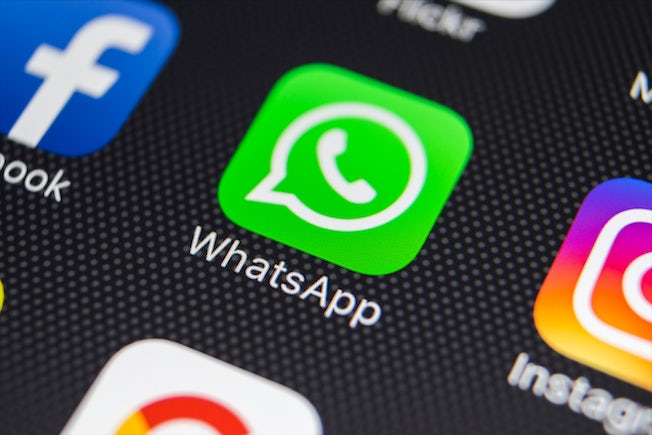 A further study from Guild reveals that nearly half (45%) of LinkedIn users believe the platform is becoming more focused on marketing and sales opportunities than it is on professional networking – the purpose for which it was originally intended.

More than 2000 UK-based users took part in the survey, 62% of whom have more than 150 connections through the platform.

Among the findings, respondents claimed that LinkedIn was becoming ‘too cluttered’ (38%), and ‘full of spam’ (28%) to be functional for effective networking. Interestingly, 59% believe that LinkedIn is mainly for ‘recruitment, hiring or finding a job’, and the majority admit that they have met fewer than 50% of their connections.

All of these statistics show a shift in the way professionals perceive and consume the website’s content – using it less for collaboration and networking, and more for self-promotion and job hunting. Indeed, despite its mission to ‘connect the world’s professionals and allow them to be successful’, just under 9% of over 55s (who are more likely to hold senior positions) feel that ‘LinkedIn is for networking with your most valuable professional connections’.
What do the new Ofcom proposals mean for social media marketing? We ask some social media experts

Brits ages 18-34 spent just 8 minutes a week engaging with news websites during the 2019 general election, according to Reuters Institute. Meanwhile, those aged 35+ spent nearly three times the amount of time doing so (22 minutes on average).

Social media seemed to have a particularly profound effect on news reading habits during the election period. Voters who used social media channels for news updates read from a wider variety of publishers and sources than others who did not. As a result, they experienced higher levels of exposure to articles containing opposing political standpoints compared to those who used other sources like newspapers and TV (which can be more deliberately selected to align with an individual’s political stance).

Labour voters were slightly more likely to use social media as a source of news than Conservative voters (67% vs. 57%), whereas more Conservative voters preferred to watch news on their TVs than Labour voters (59% vs. 52%). TV was the second most used source for news after social media during the last week of campaigning – ranking well above radio and print media – and it appeared to play an important part in assisting individuals in choosing which party to vote for. Thirty-five percent of respondents who watched debating programmes on TV claimed that they helped to inform their final choice.

Intriguingly, only 14% of those surveyed said that they had seen an online political ad, despite the large social media advertising budgets put aside by political parties. In contrast, 63% had read a print leaflet, but only 9% were visited at home by a representative leading up to polling day. 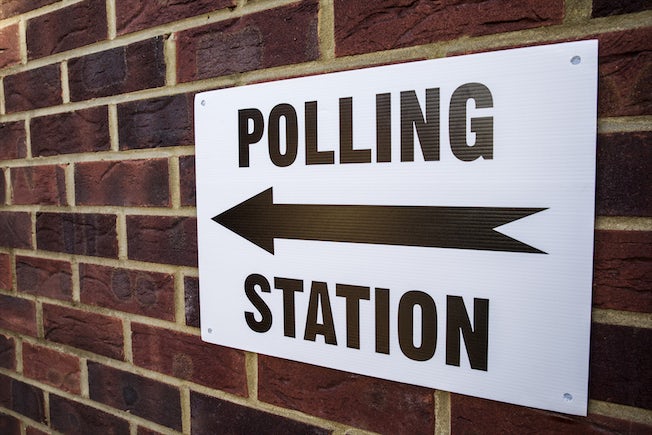 Despite their decline in popularity in the midst of the dating app boom, dating websites appear to receive higher customer satisfaction levels, according to Brandwatch. The data, released just before Valentine’s Day, revealed the online dating habits of the global population during the last 10 years.

Originally, online dating began with well-known, dedicated websites such as Match and Plenty of Fish. However, since apps like Tinder and Bumble began to saturate the market, alongside an increase of smartphone ownership and usage, websites have been somewhat left behind in the search for love. 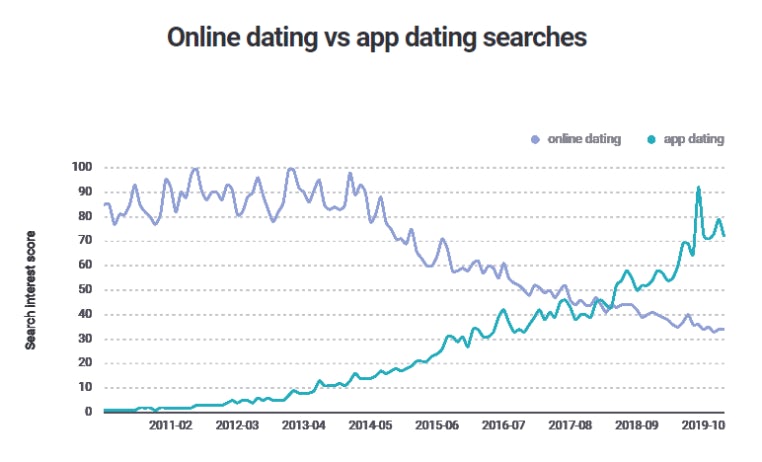 Nevertheless, despite dating websites being searched for and used less frequently than before, they appear to have received more positive mentions from users than their app counterparts. The most positively mentioned website of those studied was MySingleFriend (83%), followed by EHarmony (53%) and Doing Something (52%). Meanwhile, Bumble was rated highest for positive experiences but received significantly lower favourable mentions than the MySingleFriend website (just 56%). Feeld and Grindr were ranked second and third amongst apps with 49% and 46% respectively.

There’s always an exception to the rule and this time it’s veteran matchmaker Match, which has both website and app platforms – its website actually received fewer positive mentions than its app did (34% vs. 41%).

A day in the life of… Dominic Gallello, CMO at dating app Badoo

Why we should be critical of accepted truths in marketing – Econsultancy

A Day in the life of… Richard Brosgill, Managing Director APAC & RU at ForwardPMX – Econsultancy